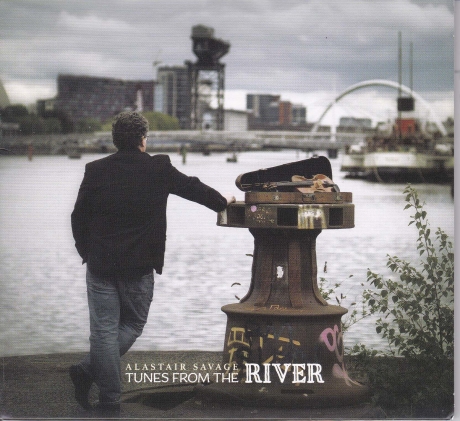 Tunes from the River

Fiddler Alastair Savage was born and raised on the Ayrshire coast south west of Glasgow. His early inspiration came from his father's accordion which introduced him to traditional Scottish music.

As a child he studied violin and classical guitar while also practising traditional music. And of course he won several competitions. He went on to study music at the Royal Scottish Academy and then in London, before becoming a respected member of the BBC Scottish Symphony Orchestra.

Tunes from the River is his sixth album and concludes a trilogy begun in 2016 with Alone with History and continued with When Barley Reaches Shore alongside fellow guitarist Euan Drysdale and bassist Iain Crawford.
On the present album the latter two return alongside a host of other Scottish musicians: flutist Eddie McGuire, piper Rab Wallace of the Whistlebinkies, flutist Ewan Robertson, fiddler Pete Clark and two Finns, Vilma Timonen on the kantele, the Karelian zither, and Timo Alakotila on piano.
The title track of the album is dedicated to the lives lost in the Glasgow air disaster of 2013. The landscapes, the sea and the rivers darkened by tragedy, all make up Alastair's very personal music.
The first track, Summer In Skye Suite, is inspired by the island of the same name, a slow and tender melody that A. Savage likes and that he renews on several tracks on the album. Because of Alastair's musical friendship with flutist E. McGuire, his flute was used on several tracks. McGuire's flute appears on several tracks, including The Lights Of Home and Leaving For America. The Rocks Of Kilchoman is dedicated to the 400 American soldiers who died in a shipwreck off the island of Islay in 1918. And then how can we not mention the beauty of R. Wallace's Scottish smallpipes on Hidden Shores or Rab's Rockin' Reel.
Alastair Savage seems to move from classical to traditional music with ease and panache as if it were a matter of course. Another beautiful album that will bring you serenity for 70 minutes.