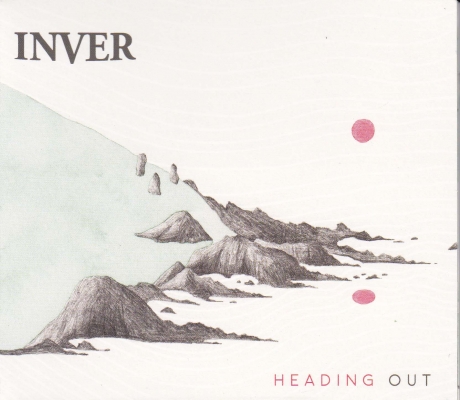 They have chosen a very Irish name for their band as Inver is a small village in South Donegal. And yet none of them is a native of the green island.

We can call them a Danish trio since Rune Barslund (accordion and whistles) is originally from Odense on the island of Fionie in the heart of Denmark. Kevin Lees (fiddles) comes from Newcastle-Upon-Tyne, a city in the North-East of England, but he has been living in Odense for several years. Finally, his childhood friend Matthew Jones (guitar) still lives in Newcastle.
This geographical diversity did not prevent them from gathering around Celtic music with Scandinavian influences here and there.
Heading Out is the debut album from this young trio that came out in 2018. The majority of the ten tracks are of their own composition, whether it is The Snag that opens the album, to The White Swan in The Window through A Turn of Events or One For The Road written by Rune. Each of these three friends composes.
Throughout the album we will enjoy two waltzes The Simple Things which is not without reminding the air Inisheer, and Vals Til Mor Og Far.
Mike McGoldrick, Joanie Madden, Liz Carroll or Sylvain Barou have influenced the playing of these three boys who have borrowed a few tunes from them. That's how we are surprised to recognize a Dañs Plinn gleaned during a stay in Brittany.
All along this nice album, they weave arrangements with varied colors but which fit perfectly together. The whole is very pleasant to listen to and the variety of the tunes gives each of them a particular personality while creating a coherent sound.
A group still young but whose talent only asks to burst. A real musical success.