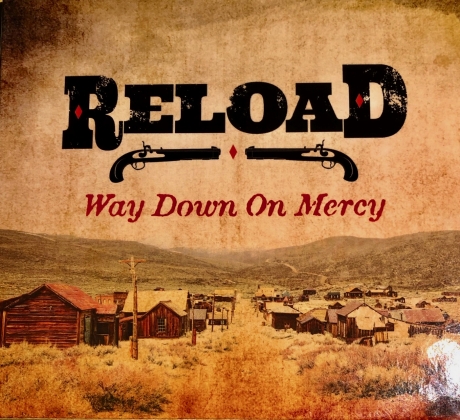 WAY DOWN ON MERCY

From the heart of the Normandy countryside to the American Wild West Things are rocking down in Normandy, with the birth of RELOAD, a new "dark country" rock group! Founded by Mil Mougenot (vocals, guitar, hurdy-gurdy), a hurdy-gurdy luthier in Normandy but also a blues rock and folk singer-songwriter, and British artist Sarah Newton (vocals, guitar) with roots in 90s pop and rock, this joyous band of English and French musicians from the south of the departement of La Manche got together during the long days and nights of the COVID lockdowns to bring RELOAD to the light of day. These five musicians offer a repertoire that's 100% original, compositions by Mil Mougenot and Sarah Newton dealing with timeless themes: of life in the great outdoors with its wheat fields and sunsets, of the hard reality of life and work in the heart of the countryside (whether Norman or American), of war and the evil that people do, of heartfelt and sometimes treacherous love. Together with their gifted band-members - Steve Bell (lead guitar and keyboards), Romain Mottier (bass guitar), Moe Sabil (drums) - this joyous Franco-English band of cowboys offers us a powerful music with a big Anglo-Saxon sound, wild guitar solos, a soul-penetrating bass, and a driving infernal drum-beat that conveys the profoundness of their dark country rock music. The twin voices of Sarah and Mil Mougenot meet in these songs, seeking one another out to better whisper in our ears compositions like "Way Down On Mercy", "This Evil Train", and "Ghosts of Normandy", the last evoking the Normandy Landings in June 1944. And then a wonderful and unexpected surprise - the arrival of Mil Mougenot's hurdy-gurdy, fusing perfectly with the band's 100% rock and country sound. The whole of this self-produced album is a complete success, with a quality which easily stands up to comparison with the best of British or American music studios. My recommendation to all organisers of rock, folk, and country concerts and festivals: don't miss RELOAD - your audiences will be "reloaded" for the whole year.